Did you know our company launched 14 years ago?  In honor of the new year upon us, here’s a flashback to our early days as featured in The New York Times at the time of our launch.

We’ve taken many detours along the way and never imagined we would be where we are today.  All “pivots” have been made possible by persistence, passion and the ability to adapt.

“The magic is in the journey – cherish the process.” – Sherri Langburt (Founder and CEO of Babbleboxx)

A Guide to Embracing Life as a Single (Without the Resignation, That Is) – New York Times 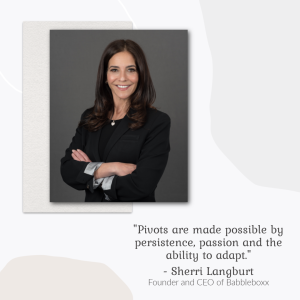 For some singles at New Year’s Eve soirees tonight, the minutes leading up to midnight will be agonizing as they ponder whom they’ll be standing next to at the pucker-up moment.

But a new Web site, SingleEdition.com, wants nothing more than to embrace them. And unlike dating sites that treat being single as a predicament, this one celebrates flying solo, and offers shopping, financial and other advice to help them do so with pride.

“If you Google the term ‘single,’ all that comes up is dating, dating, dating,” said Sherri Langburt, a founder of SingleEdition.com. “But what we’re saying is there’s a whole other realm of things that go on for a single person that are not dating.”

Articles on the site give advice on how to entertain in small apartments (have cheese- or chocolate-tasting parties instead of sit-down meals), how to cook for one (try freezing homemade soup in ice trays to simplify defrosting single portions) and how to select gifts for other singles (perhaps an audio book or a G.P.S. device to help a solo driver).

In November, dating sites drew more than 182 million visitors in the United States, according to comScore, an Internet research firm. Single Edition offers some dating advice, but it also serves up rejoinders for meddlers who ask why someone is not married: “Just lucky, I guess,” “It gives my mother something to live for,” and “What? And spoil my great sex life?”

While newsstands and the Internet are cluttered with publications about parenting and wedding preparation, Ms. Langburt, 35, said she had never seen a “lifestyle destination that embraces the culture of single living.”

The Web site, which caters to 32- to 45-year-olds, began on Dec. 1. It has yet to sign up advertisers, but Ms. Langburt said that traffic- and revenue-generating deals were in the works. She plans to make arrangements with retailers to put singles-oriented gift registries online.

In 2006, adults living alone made up 27 percent of households, more than double their share in 1960, according to census data; married couples for the first time headed just under half (49.7 percent) of households in 2005, the last year for which data is available, down from 52 percent in 2000. With the age at which couples marry continuing to climb, the trend toward singledom seems likely to continue.

But marketers, like the culture at large, often pity the unwed.

“This notion that you can live a full and completely happy life as a single person is so underrecognized that people who feel that way are reluctant to say so,” said Bella DePaulo, a social psychologist and author of “Singled Out: How Singles Are Stereotyped, Stigmatized, and Ignored, and Still Live Happily Ever After.”

In it, she coined the term “singlism” for how the unmarried are given short shrift by employers’ spousal health benefits and the federal tax code. “I think we have untold masses of silently contented singles,” she said.

Ms. DePaulo, who serves on the advisory board of Single Edition and contributes articles, said that even a recent feature for singles about “getting the dream kitchen you deserve” was validating.

“I love that phrase ‘the dream kitchen you deserve’ because it’s just the opposite of the stereotype of singles who neither want nor deserve anything nice for the kitchen,” she said. “And that assumption is part of the mythology that if you’re cooking alone, why cook a nice meal if it’s quote-unquote ‘just for you?’”

Sasha Cagen, author of “Quirkyalone,” which spawned a Web site for singles (quirkyalone.net), said that Single Edition seemed like a “great concept,” but that “their challenge is very tricky: there’s this edge of pathetic-ness that you have to be careful not to go that far into.”

She gave the example of a coffee maker featured on Single Edition that brews just one cup. “Products that imply perpetual singlehood make the user feel like this is it, single forever,” Ms. Cagen said.

But a “quirkyalone” Ms. Cagen’s term for someone who “generally prefers to be alone rather than date for the sake of being in a couple” still kindles a romantic notion of eventually finding someone worth running toward on a beach, in slow motion.

So “any site aimed at singles needs to recognize that singledom is for most people a transitional state that people will enter and exit throughout their lives, just like being married or coupled is now in reality a transitional state,” Ms. Cagen said.

According to a recent study by Packaged Facts, a division of the Market Research Group, most singles are younger than 45 and are more receptive to advertising pitches. When television commercials come on, singles are less likely either to switch channels or hit the mute button.

Singles also are more addicted to the Internet, the study said: 11 percent of singles report spending less time sleeping because of Internet use, compared with 7 percent of wedded Web users.

Advertisers should increase the visibility of singles in their campaigns because unmarried people “are sensitive to couples-centric marketing efforts in much the same way that blacks are sensitive to all-white casting,” the Packaged Facts study concluded.

As for Ms. Langburt, an odd thing happened while she was developing a business plan for Single Edition: She met Mr. Right and got married. “I don’t think marriage has changed who I am as a person,” she said. “I still coach everyone around me who is single.”